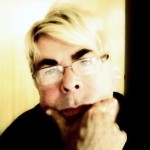 The following is a transcript of Kip Jones’ contribution to interviews on biographic research conducted by Joanna Thurston and Louise Oliver, Jones’ colleagues at Bournemouth University. The pair interviewed Jones for their film, “It’s not research, it’s just stories!” first screened at the British Sociological Association Auto/Biography Study Group Conference, in December 2018.

How did you first become involved with biographical methodology?

Using biography as a method started with my PhD. I studied the Biographic Narrative Interpretive Method with Tom Wengraf and Prue Chamberlayne.  At the time, I was having a kind of methodological panic because people at the university were trying to convince me to explore new approaches to research. Nonetheless, I thought I needed to have a method that was strong and that I could defend. In my previous life as a painter, I did very narrative paintings so the narrative component, at least, made some sense to me.

How do you face any challenges that come up when conducting biographical research?

Well, when I started out, I was a scared PhD student and studying the method at the same time as starting to do the interviews. This made it very difficult to do anything out of the ordinary. I wasn’t initially aware that perhaps the people whom I was interviewing were not going to follow the method exactly as I had been taught! Sometimes that became a problem. One woman said, “I’m not going to answer your (‘single narrative-inducing’) question because it’s against my religion” and she basically tried to shut the interview down. So that was challenging, believe me. I got an interview, but I was panicking during most of it!

At first, I had a very Pollyanna approach to the subject of my PhD interviews, informal care. My assumption was that what informal carers did was out of compassion and altruism. In most of the cases, that wasn’t true at all. It was like “a can of worms” would open up at every new interview. The interviewees would go into their stories of very complex backgrounds, particularly in their childhoods. It turned out that the people whom I interviewed all had one thing in common: they felt unloved as children. That was really counter to what I had expected and a disappointment in a lot of ways for me. It was difficult at first to accept that my premise had been wrong. Nonetheless, I really was learning a great lesson: we do research to discover what we DON’T know, not to prove what we already know or think we know.

Well now I don’t worry about justifying it, I really don’t. I’m driven by my passion for what I’m exploring; that’s what’s important to me. I’m still, however, conscious of being methodologically sound, but not in a prescriptive way. I’ve really learned to trust my instincts in terms of things like ethics. Any good researcher learns to do that, I think.  That’s the stuff that really matters to me. I find it unfortunate that some researchers don’t develop that ‘sixth sense’ around ethics. They would rather go to a committee and have them tell them what’s ethical and what’s not. In doing social research, you’re always going to come up against complex situations. You have to be prepared to deal with that using the skills that you have developed and, yes, your intuition. There will always be choices involved. We really must develop our own ethical compasses.

I’ve become very interested lately in a concept that I call “audience”—that could be a reader of a book or a journal article, or someone viewing a film, or a student in a classroom, or someone in a conference hall. We have a real responsibility to the end-receivers of the work that we are doing. It’s something that’s really important to take into consideration—who’s going to be at the other end of all this research?  Do we take the audience into account when building the dissemination of our research?

Can you tell us about your last ‘triumphal experience’ of conducting biographical research?

Well, of course the film, RUFUS STONE. When I was beginning to develop Performative Social Science, or using tools from the arts in research, particularly for dissemination, I became interested in the possibility of working with film.  That developed out of experimenting with (or abusing!) PowerPoint and later video. I think that because of my art background the visual was very important to me at that juncture. It still is.  Our team submitted a research proposal for a project on older LGBT citizens who had experience of living in the British countryside. We were successful and got the money for the project, which included the budget to make a film. That was ten years ago and today, the film still has legs, which is amazing. People continue to ask me to show it, do Q&As at various venues, and exhibit the film. The irony is that RUFUS STONE, which is not only about older people, but also older people 50-60 years ago, is seen as relevant to youth today. This fact has inspired a project on Generation Z, sexuality and gender that we are just beginning to get off the ground.

How do you feel that biographical research has evolved in the wider research community in terms of acceptance?

Once again, I think it’s about story and story is, more and more, a big part of people’s lives. The one thing that became clear to me through this process was that even when I’m telling someone else’s story, I am telling my own story. It’s very important as a researcher to keep that in mind and remember that. Just the simple fact that there is something about us or in our background that makes us interested in a subject or a person whose story we want to hear, what we’re going to include, not include—things like that—it’s so much about us!  For example, a situation that happened to me was a real break-through, an ah-ha moment. A guy started telling his story and when he got about 20 minutes in, I realised that he was telling my story. This is very freaky when that happens and particularly with a method where you can’t say anything! Like, “please stop!” Or “How dare you be telling my story!” I then began slowly to realise was that my own story was part of all of the stories I was hearing.  I had to look at my own past as well. That’s when I started writing about my own life. Because the story of RUFUS STONE is so emotional, I needed to find the poignant components in my own life so that I could imbue the characters with the emotive aspects of their lives for the film’s narrative.

For instance, I started writing about the back-story of the characters, using things that had happened in my childhood. I was writing about Rufus and his grandparents (who are not in the film at all). I thought about my own grandfather and I remembered sitting on my grandfather’s knee, his grandfather clock ticking away in the background. I wrote about that experience of mine as part of Rufus’ memories. I added the fact that the clock would then end up in his parents’ farmhouse where Rufus grew up. In this way, the clock became a central ‘character’ in the film. That all came from my story, my biography, not from any specific person whom we interviewed. Yet, it fit a theme in the film’s story: inheritance (both physical and psychological) from generation-to-generation, the passage of time, and how things change or don’t change over time. So, the whole idea of my ‘self’ being involved creatively in my writing—I’m very comfortable with it now.

How would you advise an early career researcher or someone considering using this method for the first time in their research?

In terms of the Biographic Narrative Interpretive Method, I would say, ‘Take the training’. It’s a complicated method and you will feel more confident as a researcher if you have the training behind you. It’s odd, I’m a very creative person and yet, I’m very methodical in the way that I do things. Knowing the rules is necessary in order to be creative. If I get all the ‘instructional’ stuff out of the way, I won’t have as much anxiety. “Am I doing this the right or wrong way?” Eventually, I am confident enough to ask myself, “What would I change? How would I do it differently?”  Remember: you can’t change anything unless you know the rules first. That’s what creativity is all about.

One thought on “Interview: Kip Jones talks about Biography, Auto-biography, and Creativity”